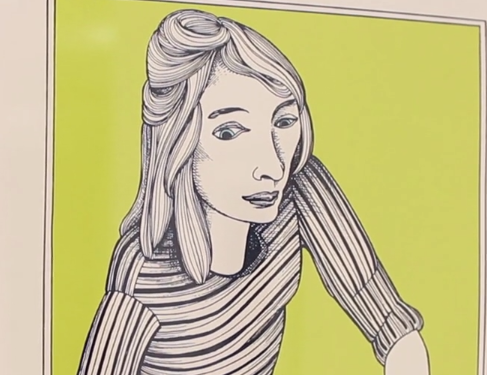 Archivist Kerry Patterson introduces Glasgow Print Studio’s exhibition, Alasdair Gray : A Life in Print and Posters. As part of a special season celebrating the artist’s 80th birthday, and his prolific art career, the studio has a series of prints and posters created by the artist, and shows the development of Gray’s work since first working with the studio in the 1970s.

Alasdair Gray is widely considered to be one of Scotland’s most influential artists, creating a large body of work that covers many disciplines, from printmaking and illustration, to mural work and playwriting. Gray’s best-known visuals are his illustrations for his books. Working closely with the Glasgow Print Studio since the 70s, Gray has created a number of his works there, including his first book, The Comedy of the White Dog. In 1981, he produced a set of six printed illustrations at the studio for his new novel, Lanark: A Life in Four Books. Gray has continued to work at the studio, often revisiting earlier works and adapting them.

This exhibition is part of the Alasdair Gray season, which celebrates the artist’s 80th birthday. A number of other Glasgow galleries will be displaying some of Gray’s visual works, and hosting events to mark the occasion.

Alasdair Gray : A Life in Posters and Print is on at the Glasgow Print Studio, until the 16th November 2014.