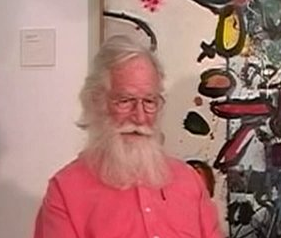 The artist and printmaker Alan Davie has died at the age of 93. From the Art in Scotland archives, this interview between Davie and Patrick Elliot explores the retrospective exhibition of his work that was on at the Scottish National Museum for Modern Art.

Alan Davie was a Scottish painter and musician. He was born in Grangemouth to a painter and etcher father, so it was no surprise Davie himself would follow a similar educational path. After gaining a diploma and travelling scholarship from Edinburgh College of Art, Davie went to fight in WWII. After the war, he explored a diverse range of activities, however, before returning to painting: from 1949 to 1953 he earned his living by making jewellery and in 1947 he worked as a jazz musician, an activity he continued in later life.

Finally making use of his travelling scholarship, Davie went to Italy with his new wife, Janet Gaul, and it was there that his eyes were opened to the world of Italian art and the wealth of expression within it.

Davie’s work showed an interest in the myth and symbolic representations of birth, and death in many different cultures. He worked in an improvisatory manner, producing pieces based on his interests and whatever came to mind. Davie’s feeling was that everyone had the ability within in them to make art, and that it wasn’t necessarily a taught discipline.