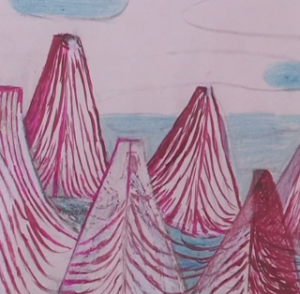 Head of Collections International Art at Tate Modern, Frances Morris, introduces ‘Louise Bourgeois, I Give Everything Away’ at the Fruitmarket Gallery. Set out chronologically, this series of drawings on paper was created during a period of insomnia, which Louise had in the early 90s. She didn’t intend to keep the drawings, but her assistant Jerry Gorovoy, salvaged them from the bin, and encouraged Louise to exhibit them.

Louise Bourgeois is a French-American artist, best known for her sculptural and drawing work. Bourgeois’s career spanned over seven decades, and has had great influence for many who work in the art world today. Much of her work is autobiographical, and stems from experiences in her childhood.

The exhibition is on at the Fruitmarket Gallery, Edinburgh, until the 23rd February 2014. It complements a major retrospective of Bourgeois’s work held by ARTIST ROOMS, at the Scottish National Gallery of Modern Art, Modern One, which is on until 18th May 2014.