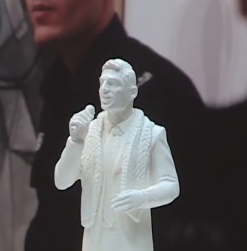 Palestinian artist Khaled Hourani holds his first retrospective at Glasgow’s CCA, featuring installation and conceptual work ranging from the 2000s. Hourani has been of great influence in the growth of Palestinian art, and the way it is perceived. Although not showing much of his own work, Hourani works as a mediator in the arts.

Hourani is the co-founder of the International Academy of Art Palestine in Ramallah and the initiator of the 2011 Picasso in Palestine project that brought an original Picasso painting in the West Bank for the first time in history. The school borrowed and exhibited Picasso’s Buste de Femme, 1943, from the Van Abbemuseum in Eindhoven, The Netherlands, and debuted documentation of the project at dOCUMENTA (13) in 2012.

Hourani has curated and organised several exhibitions such as the young Artist of the Year Award in 2000 and 2002 for the A.M. Qattan Foundation. He was the curator of the Palestinian pavilion for São Paolo Biennale, Brazil and the 21st Alexandria Biennale, Egypt and served as an artistic advisor for Liminal Spaces in 2006. He writes critically in the field of art and is an active member and founder of a number of cultural and art institutions. Recently he was awarded the Leonore Annenberg Prize for Art and Social Change.

Khaled Hourani’s exhibition is on at the CCA, Glasgow, as part of the Glasgow International Festival, until the 18th May, 2014.