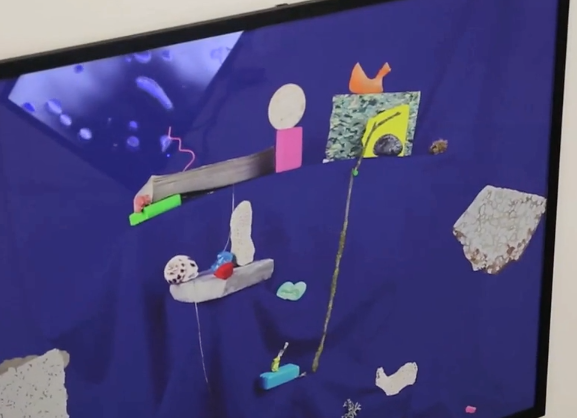 Chris Macinnes has transformed his bedroom into a white cube gallery for the exhibition SimStim, as part of this year’s Glasgow Open House Art Festival. Working with three other artists, Stephanie Mann, Sam Dransfield and Aymeric Tarrade, the show featured an interactive game allowing anyone on the Internet to contribute to the curation of the show. Over the course of the weekend, the pieces of work were readjusted or rearranged as per the most recent curatorial submission, contributing to an exploration into reality and virtual reality and the positive nature of the anonymous user on the Internet.

SimStim was part of the Glasgow Open House Art Festival, which ran from the 1st to the 4th May, exhibiting artworks across Glasgow in a variety of venues, from flats to industrial spaces. Glasgow Open House is an artist-led, not-for-profit organisation that was founded by Glasgow School of Art alumna Amalie Silvani-Jones in 2013. It was formed in order to meet the practical needs of the city’s grassroots art community and takes its lead from Glasgow’s already prevalent ‘Do-It-Yourself’ culture in relation to visual art and music.