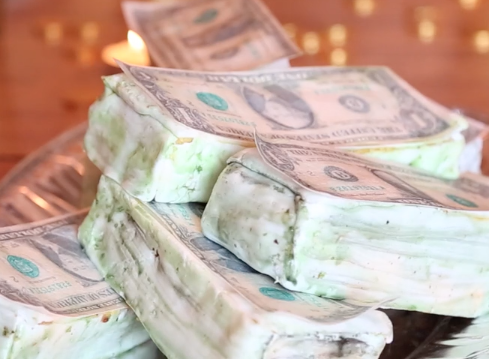 Artists Emily Shepherd and Ellie Harrison explore our relationship with money whilst eating food made to look like money. Based on the ethos of Death Cafe, a reproducible event on the subject of death in a cafe environment, MONEY M€AL is the first ever event based on the notion of sharing food and conversations on the subject of money. Glasgow’s very own CH£APSKATE, artist Ellie Harrison, will facilitate a discussion exploring our faith and belief in ‘the money system’ and look at new forms of exchange, such as local currencies, which aim to both resist and provide working alternatives to mainstream capitalism.

MONEY M€AL was part of the Glasgow Open House Art Festival, which ran from the 1st to the 4th May, exhibiting artworks across Glasgow in a variety of venues, from flats to industrial spaces. Glasgow Open House is an artist-led, not-for-profit organisation that was founded by Glasgow School of Art alumna Amalie Silvani-Jones in 2013. It was formed in order to meet the practical needs of the city’s grassroots art community and takes its lead from Glasgow’s already prevalent ‘Do-It-Yourself’ culture in relation to visual art and music.