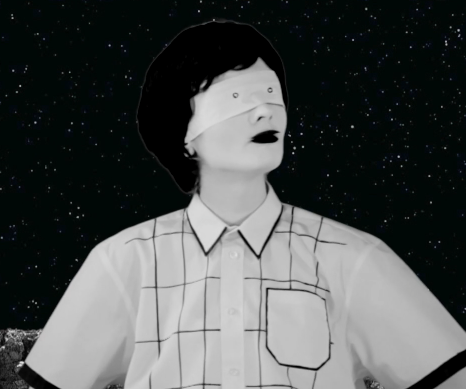 Emma Finn’s darkly humorous videos transport us to uncomfortable liminal places that sit somewhere between reality and invention, spaces where real people have drawn-on faces, and babies are sent in the post. All of Finn’s work is driven by ‘the Marks’. More than just drawings, for Finn the lines which form in her sketchbooks are independent forces, emerging on the page with stories they want to tell. Behind many of Finn’s works is a lengthy process of research, to identify the stories, places and ideas that ‘the Marks’ are seeking to share.

The resulting films describe a world where multiple planes operate independently of each other, reflecting and mirroring the artist’s interest in how shifts in modes of social interaction (from the fire, the original focal point for storytelling, to television to individual screen) have increasingly allowed us to create our own parallel private worlds as we sit beside one another.

Finn’s newest work is situated in the mountains, places which by their very nature create boundaries and divide up space. The ‘Marks’ are currently up in the mountain, dwelling on how to get out of broken cable cars, find their lost tickets and making endless paper airplanes. The air is thin and they move slowly and quietly; the mountain itself is making all the noise.

Double Mountain is showing in Unit 100, St.James Centre, Edinburgh, as part of the Edinburgh Art Festival. Find out more at www.edinburghartfestival.com.