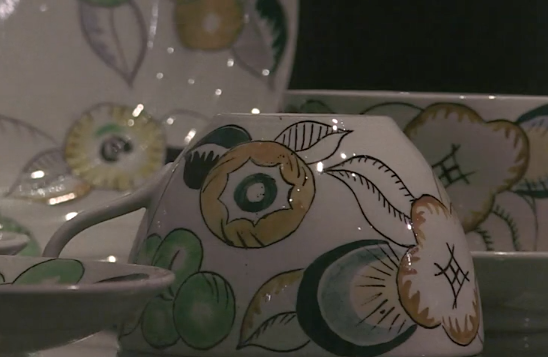 Rediscovered explores the work of artist Emma Gillies, who created painted and thrown ceramics whilst at the Edinburgh College of Art. Found locked away in a cupboard in ECA, these items had been used for still life displays without anyone realising where they came from or who they were made by. Director of Undergraduate Studies Gordon Brennan, introduces the collection and talks about the history behind the works, which will be on show for one more week.

Emma Gillies was the sister of Sir William Gillies, who was a renowned Scottish landscape and still life painter, taught at ECA for 40 years and was Principal from 1960 until his retirement in 1966. Emma took up ceramic painting as a member of the Scottish Women’s Rural Institute in East Lothian. She continued to paint commercial items as well as firing and painting her own studio pottery when she joined ECA in 1929. She died tragically young, at the age of 35, leaving behind a small body of work, items of which featured in William’s paintings.

Emma Gillies : Rediscovered is on in the University Main Library, Exhibition Gallery (Ground Floor), George Square, University of Edinburgh until the 7th March 2015.