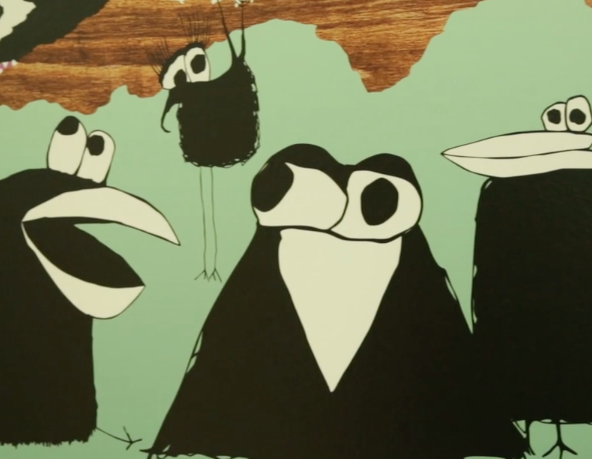 Frances Priest worked with shapes, motifs and patterns, inviting children to play with them, arrange them and imagine what they might be. She has used the drawings made by children during the residency to create a series of artworks based on four themes; circus characters, climbing characters, birds and space travel.

Ian Richards used letraset transfers, asking young people to write a sentence or phrase, building narratives by passing on one person’s writing to somebody else and asking them to respond to it. He worked with young people to digitally create a series of bold, colourful patterns based on the repetition of one motif. Ian has developed the phrases, stories and patterns created during the residency into a series of artworks combining patterned Scottish mountain ranges, tower blocks made out of bread, hot air balloons and a cast of funny bird characters!

Alison Unsworth created the Unfinished Places newspaper in collaboration with children and young people at three local schools close to the site of the new hospital. Unfinished Places is a newspaper for children and young people. It’s full of pictures which are only half finished and we asked for help to complete them by drawing, writing or sticking things in. Pages from the returned newspapers can be seen at yorkhilldrawings.com. Alison’s artwork for the new hospital is based on four themes relating to life in Glasgow and the wider Scottish landscape; wildlife, habitats, transport and buildings or structures. She selected imagery relating to these four themes and combined it together to create different scenes, influenced by a selection of ideas, drawings and stories from the returned newspapers and from artwork created by children and young people at Yorkhill.

Emma Varley worked closely with staff in the Caledonia Ward (the national child inpatient unit), considering how the images she created might be used in part to assist therapy or influence behaviour. She has created a series of artworks combining detailed line drawing with coloured shapes and graphic motifs. The artworks include familiar, domestic objects such as a toothbrush and toothpaste or a pair of shoes, alongside household furniture and friendly animals such as a cat and a fox. All of the imagery was carefully chosen in collaboration with staff in the department.

A library of over 100 designs has been created for future application as required.

The Therapeutic Design and Arts Strategy for NHS Greater Glasgow and Clyde’s new South Glasgow University Hospital and Royal Hospital for Sick Children is focused on the patient pathway. The hospitals provide new state of the art healthcare facilities and high quality designed environments for a significant proportion of the population of Glasgow, and in some fields, for Scotland. The project brings together Children’s and Adult Acute services with existing Maternity, Neo-natal and Neurosciences services on one campus.

Ginkgo Projects’ evidence-based programme for the Therapeutic Design and Arts strategy has sought to enhance the patient experience and journey through developing creative processes and works of art and design that aim to connect patients, staff and visitors to the hospital’s social cultural and environmental context.