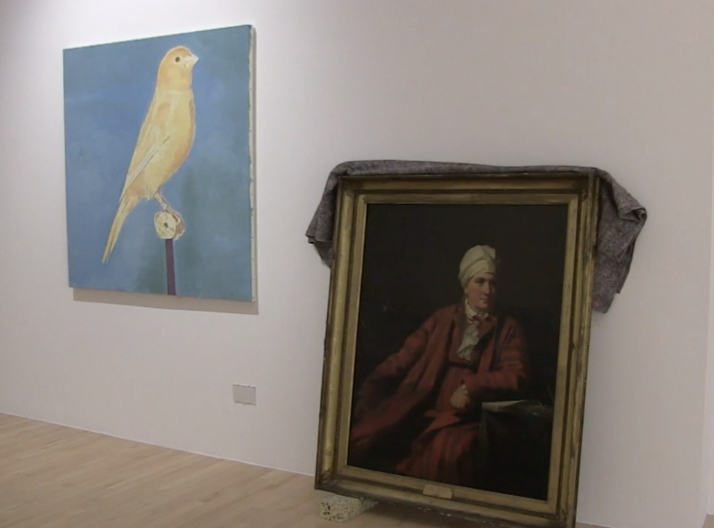 Luc Tuymans is one of the most influential painters working today. For his first exhibition in Scotland, at the University of Edinburgh’s Talbot Rice Gallery, this provocative artist will bring together his work with that of the most significant of Scottish Enlightenment portrait painters, Henry Raeburn. Utilising images of yellow and pink canaries, anonymous gatherings of people and Raeburn’s sombre black-robed academics, Birds of a Feather will associate themes of independence, enlightenment and social control.

Within the exhibition the canaries, being one of the most recognisable domesticated birds, evoke a natural world reformed through biological and social engineering. In this light they inculcate Raeburn’s sitters, including William Robertson and John Playfair (Scottish Historian, Minister and University Principal on one hand and Professor of Natural Philosophy on the other) in a world that is observed, analysed and transformed at the same time by those very acts. For Tuymans, looking is never passive. And here the confidence exuded by the male sitters, dressed in their frocks, preened and supported by attributes of their intellectual endeavours, evolves to become a palpable feeling of disquiet. Displayed above the Raeburn portraits, ghostly silkscreen images of crowds gather for some unknown purpose suggestive of broader social movements affecting anonymous ‘masses’. In Birds of a Feather, the individuality and the implicit humanism of Raeburn’s single identities is haunted by this suggestive apparition.

Luc Tuymans maintains an uncompromising attitude towards painting, which he considers to be incapable of conveying real-world subject matters, a stance that has allowed him to form a clear analytical relationship with the medium. Often photographing and re-photographing images and models his work presents a contemporary and distantiated way of looking, examples of this studio research included in Birds of a Feather give a rare insight into his working process. Tuymans’ subjects have included serial killers and the Holocaust, but equally the mundane and incidental. By acknowledging the impossibility of penetrating the real, Tuymans offers sideways glances at familiar things, discharging taboos and offering a different kind of visual resonance. In his own words: “The Object and the image function as transmitters; they have this special quality that is outside language, which mutes the thing to the point where silence becomes like a weight […] Those elements are really fascinating because they are in a sense not there; after all, they are depicted.”

The exhibition will include new paintings and drawings made for Edinburgh. A catalogue with commissioned essays by Will Self and Colin Chinnery will be available in November.