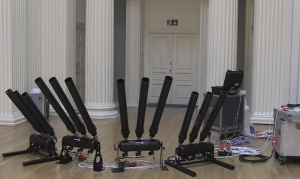 One of the commissioned artists for Talbot Rice Gallery’s Counterpoint exhibition, Ellie Harrison introduces her installation/event, After the Revolution, Who Will Clean Up The Mess? Set up in the gallery’s grand Georgian gallery space, Harrison presents four large confetti cannons that are linked to a detonation device. Relying solely on the result of the Scottish Referendum for Independence, the cannons will be detonated if the public vote YES, showering the gallery space in confetti. Should the public vote NO, then the cannons will remain dormant for the rest of the exhibition.

After The Revolution, Who Will Clean Up The Mess? is on at the Talbot Rice Gallery, as part of the Edinburgh Art Festival, until the 18th October 2014. Harrison will be hosting an all night Referendum Results party at Talbot Rice on the 18th/19th September. More details can be found here