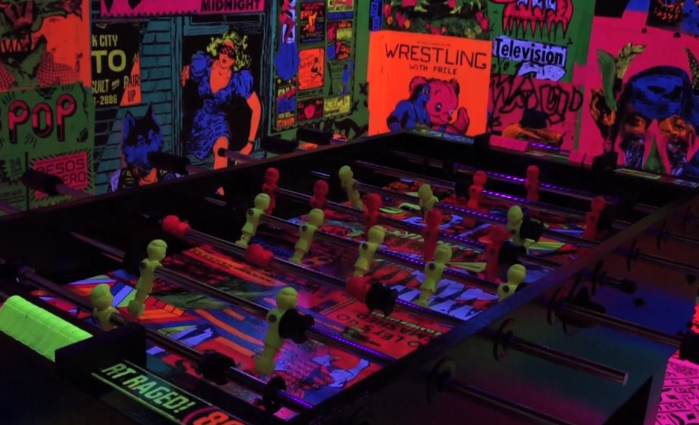 One half of artistic duo, FAILE, Patrick McNeil introduces the FAILE Bast Deluxx Fluxx Arcade Edinburgh 2014, an exhibition featuring specially programmed video games and pinball machines. First seen at Art Basel Miami 2013, this is the first Scottish exhibition for the artists and centres round their idea of audience participation.

FAILE is the Brooklyn-based artistic collaboration between Patrick McNeil and Patrick Miller. Their name is an anagram of their first project, “A life.” Since its inception in 1999, FAILE has been known for a wide ranging multimedia practice recognisable for its explorations of duality through a fragmented style of appropriation and collage. FAILE’s work is constructed from found visual imagery, and blurs the line between “high” and “low” culture, but recent exhibitions demonstrate an emphasis on audience participation, a critique of consumerism, and the incorporation of religious media, architecture, and site-specific/archival research into their work.

FAILE Bast Deluxx Fluxx Arcade Edinburgh 2014 is on in the Lower Cafe Gallery and Former Women’s Locker Room, Summerhall, until the 26th September 2014.