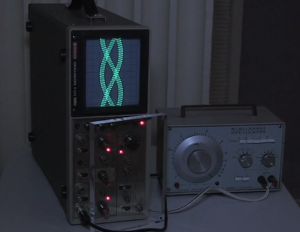 As part of Talbot Rice Gallery’s sonic art festival, Gap in the Air, Joe Banks presents the sound installation ‘The Analysis of Beauty’, based upon William Hogarth’s thesis of the same name. Hogarth was interested in ‘Serpentine Lines’, featuring them in his work and studying them extensively. The ‘S’ shaped lines relate to what we know as sinusoidal waves, the visual form which originates from mathematics and musical acoustics.

Banks, inspired by the work of Hogarth, and having acquired an oscillator and oscilloscope, created an installation that explored the sine waves and created the sound generated from these waves. He has utilised the 16 speakers set up for the festival to fill the Georgian Gallery full of sound.

The Analysis of Beauty will be in the Talbot Rice Gallery until the 29th November 2014. Gap in the Air continues into February next year.

One thought on “Disinformation : The Analysis of Beauty”