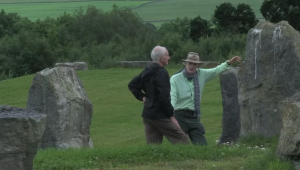 Jeffrey Hoffman made five flights as a space shuttle astronaut, including the first mission to repair the Hubble Space Telescope in 1993, when the orbiting telescope’s flawed optical system was corrected. Trained as an astrophysicist, he also flew on 1990 Spacelab shuttle mission that featured the ASTRO-1 ultraviolet astronomical observatory in the shuttle’s payload bay. Over the course of his five missions he logged more than 1,211 hours and 21.5 million miles in space.

Charles Jencks is an American architecture theorist and critic, landscape architect and designer. His books on the history and criticism of modernism and postmodernism are widely read in architectural circles. He studied under the influential architectural historians Sigfried Giedion and Reyner Banham. Jencks lives in Dumfries and Galloway, Scotland where he designs landscape sculpture.

The MERZ exhibition runs to 3rd September while Crawick Multiverse and A’ the Airts are open year-round.